Can a Lobster be an Archaeologist? – SUT launches children’s book to ignite interest in underwater career opportunities 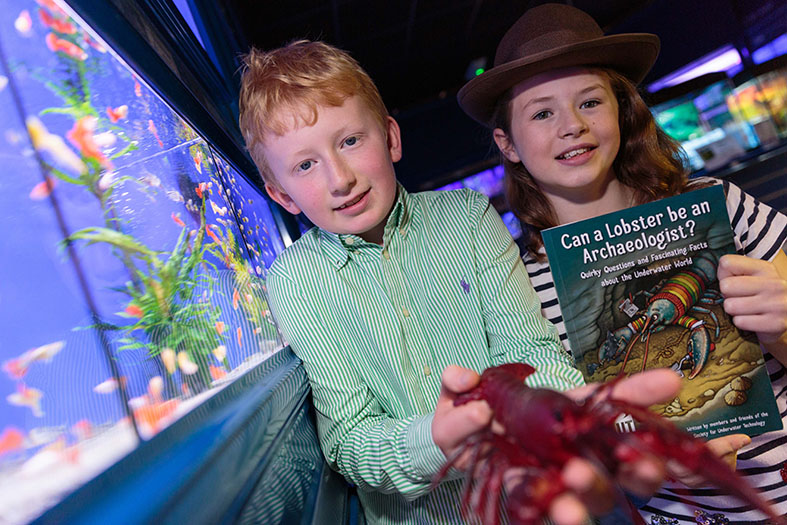 The Society for Underwater Technology (SUT) has today launched a quirky, illustrated book for 10 – 14 year olds aimed at growing interest in the exciting variety of careers on offer under the waves.

The book titled, Can a Lobster be an Archaeologist – Quirky Questions and Fascinating Facts about the Underwater World, is available from Wednesday 25th November with all proceeds going to SUT’s Educational Support Fund, set up to help young people pursue learning and development opportunities.

The book takes its name from a true story about Larry the lobster who helped divers discover a missing 8,000 year old Stone Age civilisation near the Isle of Wight.

The book has been peer reviewed by children. One of the young critics, ten-year-old David Laing of Aberdeen said: “It’s packed full of interesting stories covering everything from real life sea monsters to whirlpools, finding treasure from sunken ships and how to build an underwater robot. It’s fun to read, but you also learn a lot of new facts and the pictures are brilliant.”

The 150 page book has been drafted by SUT members who are marine scientists, divers, subsea engineers, academics and from the merchant navy.

It covers topics such as:

Dr Bob Allwood, CEO of SUT and one of the authors said: “We wanted to bring to life all of the wonders of working underwater. It’s a challenging time for many sectors at the moment, but it’s important that we continue to inspire the next generation and show them all of the possibilities that are open to them. One common thread between the authors is that they love what they do and this passion and excitement is infectious. We hope the book will make an ideal stocking filler for many young people this Christmas.”

The book has been funded by SUT, which will celebrate its 50th anniversary next year.

Can a Lobster be an Archaeologist? retails at £12.99 and can be purchased from Wednesday 25th November from SUT www.sut.org/can-a-lobster-be-an-archaeologist/ and from Amazon www.amazon.co.uk from the end of the month.

Image: David Laing (10) and Daisy Nicholls (10) of Aberdeen launch the new book Can a Lobster be an Archaeologist? All proceeds from sales will go to the Society for Underwater Technology’s Educational Support Fund.