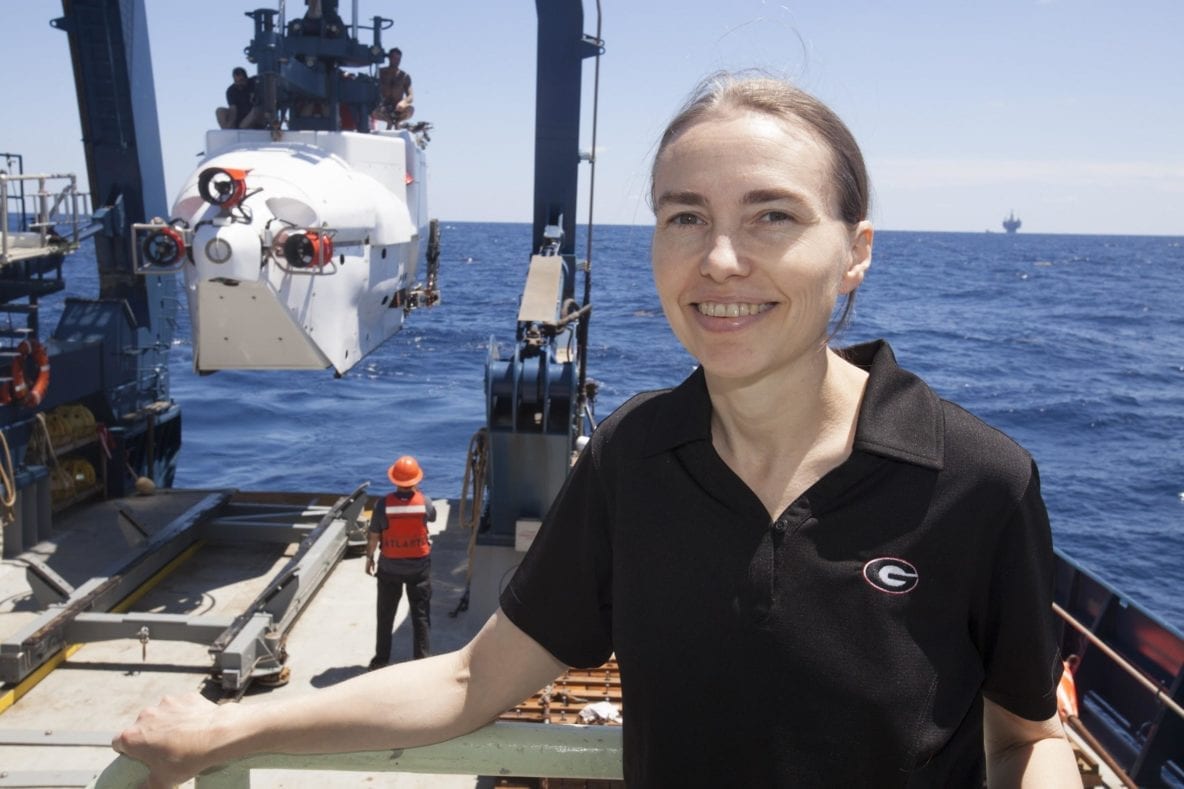 WASHINGTON, DC, US AND LONDON, UK — The Marine Technology Society (MTS) and The Society for Underwater Technology (SUT) are proud to announce that the 2022 Captain Don Walsh Award for Ocean Exploration has been won by the internationally recognised oceanographer Samantha (Mandy) Joye, a Regents’ Professor in the Department of Marine Sciences at the University of Georgia, USA, whose work has revealed unexpected connectivity between elemental cycles, unanticipated feedbacks between geological elemental and microbial dynamics, and fundamental controls on microbial populations and their activity.

Joye is an internationally recognized educator, deep ocean explorer, oceanographer, and environmental advocate. She is an expert in ocean biogeochemistry and microbial ecology and her work has focused on the Gulf of Mexico and the Gulf of California, and along the North American Atlantic Margin. Her interdisciplinary research focuses on deep water habitats and extreme environments and tracks the cycles and fate of hydrocarbons, nutrients, sulfur, metals, and trace gasses and interrogating the microbial communities that cycle these materials.

For the past two decades, Joye has studied natural seepage and chemosynthetic habitats in the Gulf of Mexico. She has led exploration missions across the Gulf of Mexico to discover and document otherworldly environments, including mud volcanoes, brine pools, and gas hydrate sites. Her research during the Deepwater Horizon oil spill environmental response significantly advanced the understanding of the critical role of microorganisms in degradation of oil and factors that enhance microbial degradation and optimize their environmental response.

Awarded jointly by the Marine Technology Society and the Society for Underwater Technology, this esteemed award is named after American oceanographer, explorer, retired naval officer, and marine policy specialist Captain Don Walsh. Walsh and co-pilot Jacques Piccard were aboard the bathyscaph Trieste when it made its daunting record descent on January 23, 1960 into the deepest point of the world’s oceans – the Challenger Deep in the Mariana Trench. The award recognizes outstanding, sustained, international contribution to the development, application, and propagation of marine technology toward the advancement of ocean exploration.

“I am so incredibly honored to receive the 2022 Don Walsh Award for Ocean Exploration,” Joye said. “Don Walsh’s contributions to marine technology and ocean science are unparalleled – he is an inspiration to me, and to so many others. I want to thank MTS and SUT for honoring me with this award, and for empowering our community to develop and deploy new technologies that enable ocean discovery.”

“Dr. Joye’s contributions to the advancement of ocean exploration are significant and exemplify the qualities MTS and SUT are proud to recognize with this award. We are excited to see her innovative techniques and application of marine technology continue to impact the ocean community,” said Zdenka Willis, MTS President.

Moya Crawford, SUT’s President, added: “I am particularly struck by the relevance Dr. Joye places on science and its interface with engineering. This form of collaboration is vitally important when working in our global ocean.”

The Award was instigated in 2020 – the inaugural winner was Dr. Edie Widder a MacArthur Fellow, a deep-sea explorer, and conservationist who combines expertise in oceanographic research and technological innovation with a commitment to reversing the worldwide trend of marine ecosystem degradation. This was followed in 2021 by a joint award to Victor L. Vescovo and Patrick Lahey for the 2019 Five Deeps Expedition and further dives of scientific and historical interest in subsequent years.