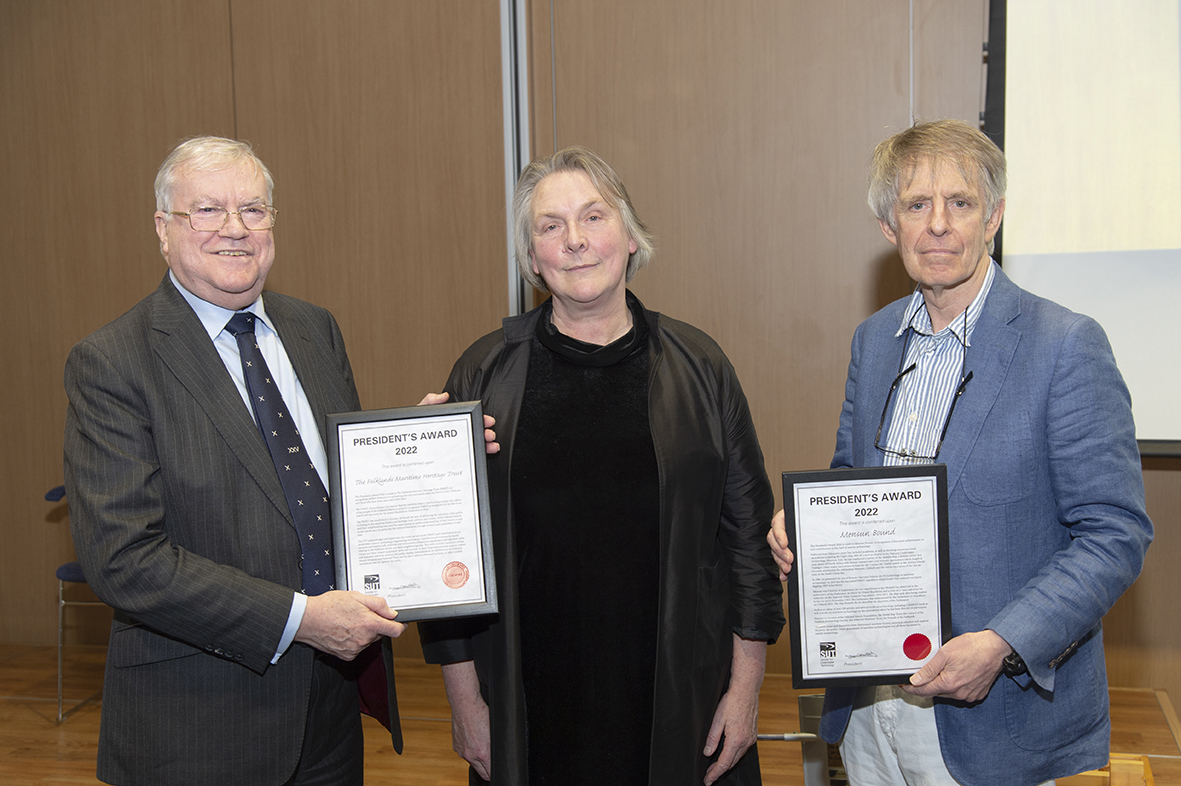 The discovery of Ernest Shackleton’s ship, Endurance, an incredible feat of subsea engineering and specialist expertise, took centre stage at the recent Annual General Meeting of the Society for Underwater Technology (SUT) along with news of the election of a new Fellow of the learned society and the presentation of the Alan Greig Memorial Prize.

After the formal proceedings, marine archaeologist and author, Mensun Bound and Donald Lamont, Chair of the Falklands Maritime Heritage Trust (FMHT) were each presented with the SUT President’s Award by the SUT’s President, Moya Crawford.

“The story of Shackleton, Frank Worsley, and the rest of the crew of the Endurance remains an inspiration to people around the globe over a hundred years after her loss. I can think of no better team of people to find her and re-kindle this story than Mensun Bound and his friends and colleagues from the FMHT.

“For this prestigious award from the SUT to go to the Southern Ocean, to mark the discovery of such an iconic wreck, lying in  3000 metres water depth, beneath the ice brings modern elements of determination, teamwork and endeavour to the fore, giving us all inspiration and it is my privilege to present the President’s Award to mark such an outstanding achievement.”

Falklands-born Mensun Bound the Expedition Director of Exploration and a Trustee of the FMHT responded saying that the Award was unexpected and that he was overwhelmed and extremely grateful. He emphasised that it was: “a team effort from beginning to end” a theme repeated by Donald Lamont who, speaking on behalf of the FMHT, said how delighted and honoured he was saying:

“The project emphasises that teamwork involving people using up-to-date technology in the most challenging of environments brings success” and adding: ““I consider it a matter of pride that an outstanding team can achieve such an incredible result.”

Mensun Bound then spoke about the two expeditions in 2019 and 2022 to discover ‘Endurance’ the story of which is told in his new book ‘The Ship Beneath the Ice: The Discovery of Shackleton’s Endurance’, with Nico Vincent of Deep Ocean Search (DOS), who was manager-in-charge of all equipment preparation, testing and training ashore and all subsea operations and related topside activities at sea on Endurance22, explaining the numerous technical achievements.

In his book Mensun gives a blow-by-blow account of the two dramatic expeditions, the Weddell Sea Expedition and Encurance22, to find ‘Endurance’. As with Shackleton, Bound too experienced failure and despair, and at times his own ship was on the cusp of being frozen in ice, much like Endurance.

As one of the world’s foremost experts on the ‘Endurance’ his book includes previously untold stories of Shackleton’s epic survival and fascinating details about his iconic ship. It also includes numerous photos from the original expedition in 1914-17, as well as from the wreck on the seafloor.”

Nick McNaughton: was is a newly elected Fellow of the SUT for ‘Services to the Perth (Australia) Branch’, as the citation explained:

“Over the last 13 years Nick, through direct involvement with the Society’s Perth branch has assisted it in moving forward through tough times by taking on a number of sub-committee positions including Branch Secretary, working on Branch Strategy, Scholarships, YES!, training courses, involvement in the AGM and Annual Dinner.  His direct and on-going support has directly assisted the Branch in achieving SUT goals and member engagement.” 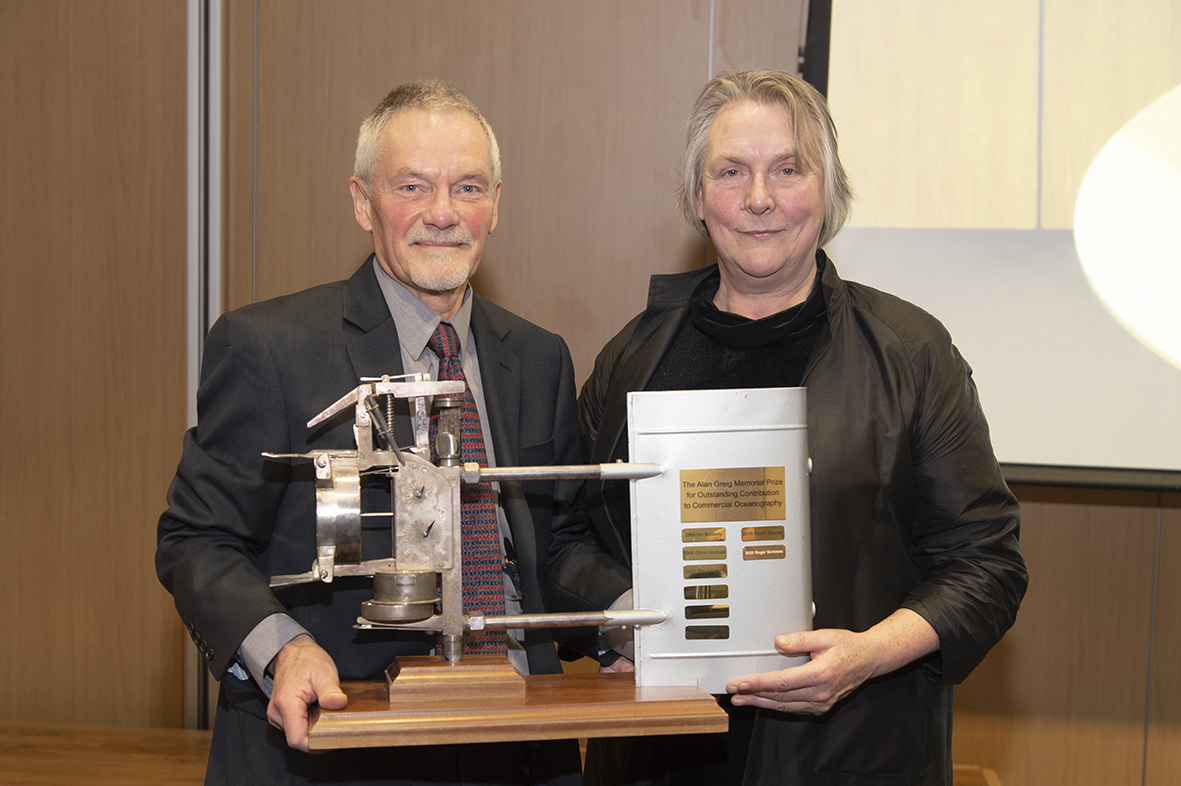 The Alan Greig Memorial Prize for Outstanding Contribution to Commercial Operational Oceanography was awarded to Roger Scrivens who was presented with the Ekman Meter, first awarded in 2006 following Alan’s death in 2004.

As he accepted the award, Roger Scrivens paid tribute to Alan Greig:

“My delight at receiving the Alan Greig Memorial Prize has obvious grateful overtones of professional recognition from my peers but above that is the personal aspect. Alan Greig, believed to be the UK’s first ever ‘commercial oceanographer’, was a very intelligent, humble, knowledgeable, diligent and professional man. For me he was also a wonderful family man, a trusted friend and a very reliable business partner. Taken too soon in his mid-fifties, he was a great loss to the world of operational oceanography and a great loss to me.”

Commercial operational oceanography has grown to be a significant area of enterprise with companies offering a wide range of products and services to meet an ever-increasing range of applications. For example, it is critical to the offshore oil and gas sector where drilling and production are taking place in ever deeper waters and in ever more hostile environments such as the Arctic. In order to conduct these and other operations safely, economically, and in an environmentally acceptable way it is crucial to be able to measure, understand and predict the ocean environment. Many pioneering organisations have emerged to deliver commercial products and services tuned to meeting the specific needs of those who operate in the marine environment.

Further information on all aspects of the SUT’s work and details on all categories of membership are at www.sut.org